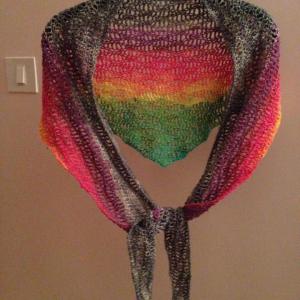 This is a shawlette I made during a yarn retreat weekend with Dedri Uys in November 2015.  The pattern is Dedri’s Lazy Waves Shawlette and we were able to pick some beautiful yarns to work this up in.  The starting chain and foundation row resulted in much swearing at the time (I have an aversion to long starting chains!) but it was worth it.  The effect is stunning and Dedri is officially one of the most patient and inspiring people to spend a weekend with.  Take a look at her fantastic blog.  The yarn is a Devon Sun Yarns gradient in sock weight yarn.